I reported the National Amateur Grouse Championship in Oxford, New York in the fall of 2013, the winner and champion was a fancy going, hard driving female setter named ‘Spitfire”. When it was time to breed her, Mike Spots, her owner called, and we bred her to my 3x RU Open Grouse CH. Long Gone Studly (4x & GNG CH Long Gone Buckwheat ex CH & RU CH Allie Cat) I keep a stud fee female pup, I registered as Juicy call name JU JU Bean!

JU JU showed a lot of promise early and even though she was a late spring whelp, I killed A LOT of birds over her points as a young puppy (Fall of 2015). JU showed a talent for finding, pointing and holding grouse. JU Ju was started in trials in the spring of 2016, placing in every stake I ran her in, placing in two puppy classics in the process. In the fall of 2016 I ran her in, and she won, the Bill Kearns Memorial Open Derby Classic with three broke woodcock finds. My old friend (from like 5th grade) Tony Bly then took JU JU up to New Brunswick, and ran her in the Prestigious and time honored North American Woodcock Futurity, which they won with 2 broke woodcock finds and a broke grouse find that required a relocation. I hunted her hard the rest of the fall and killed many wild birds over her points. In the spring of 2017 JU JU competed from West Virginia, to PA., to NH and Maine, winning first in these diverse regions on all different types of cover and birds. Juicy won both The White Mountain Open Derby as well as The Garfield Wall/ Clifton Hale Open Derby Classics. JU JU won an open shooting dog stake as a derby to qualify her for the Grand National Grouse Championship, for life.

I worked Juicy all summer on wild birds and she loves finding and pointing grouse and woodcock. I entered her in the 91st New England Open Grouse Championship in Sept with a strong field of some of the best grouse dogs in the country, from PA, NY and The Canadian Maritimes. JU JU had a great scouted grouse find (Thank you Joe Dahl for finding her on point for me) and two woodcock finds in a strong hour of hunting in oppressive heat. Ju JU was named runner up champion for her efforts. We are especially pleased as JU JU is a very young shooting dog, being whelped April 26, 2015 and this was the first championship I ran her in. We enjoyed hunting her a lot this fall (2017) and killed many wild birds over her points When we breed her we will post here on this site. 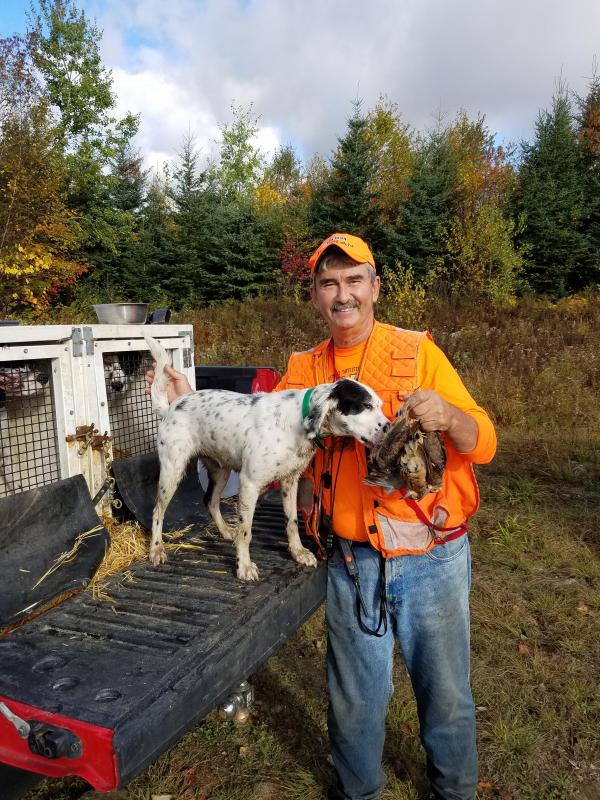